The area north to us, and in particular Barakula State Forest, seems to have received more rain than the drought-stricken areas we visited in the first two days. Grasses are greener, more flowers were out, and we were considerably more successful in finding the species we were after. 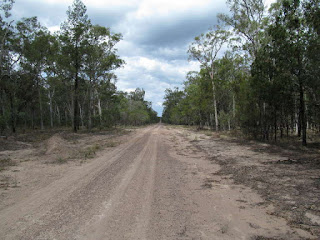 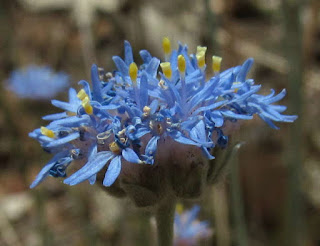 Brunonia australis (Goodeniaceae); I had previously seen it near Alice Springs in the arid zone and was consequently a bit surprised that it grows here in a forest. 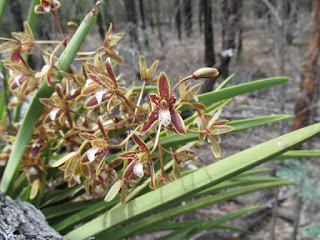 This epiphytic orchid was only in reach of my camera because the tree it grows on had fallen over. Cymbidium canaliculatum (Orchidaceae), as far as the photograph allows identification. 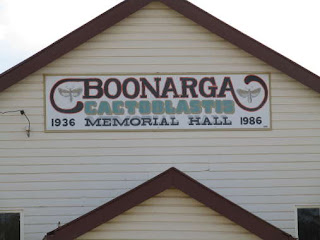 As mentioned in the previous post, the cactus moth that killed off most of the Opuntia infestations is understandably a big thing in this area. We drove past a memorial hall dedicated to this species of insect.
Posted by Alex SL at 10:41 PM No comments:

Australia surely has its fair share of introduced weeds and invasive plants. On this trip I have already seen a few that I had only heard of but not seen before, and others that are much more abundant here than further south. 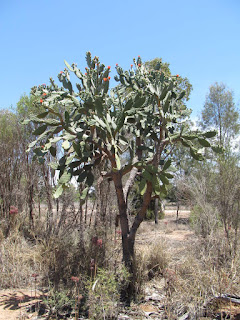 Opuntia is one of the textbook cases of an economically promising plant turned into horrible invasive weed but also of biological control done well. I remember even as a teenager seeing a documentary that showed first near-monocultures of Opuntia cacti covering the Australian landscape and then the devastation the biological control agent - a moth - caused in the populations of the cactus after it was released. There are memorials in this area celebrating the defeat of the cactus and the efforts of the moth. Wikipedia has a nice little entry on the issue. 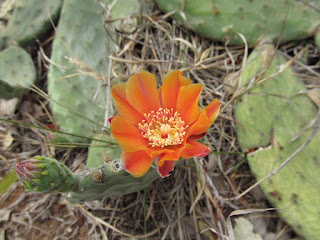 Above the flower of a low-growing specimen. Apparently numerous species of the genus had been introduced, so I am not sure which one this is. 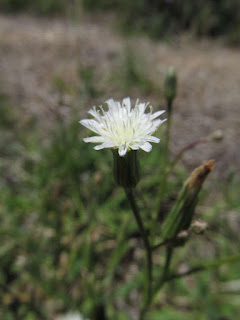 One of the plants I had read about but not seen before is Hypochaeris microcephala (Asteraceae), one of several weedy species of its genus introduced to Australia, but the only white-flowered one. 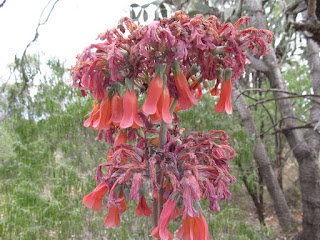 Finally, a Bryophyllum (Crassulaceae). We saw it frequently along roadsides, but most of the plants were past flowering and presented merely shrivelled, blackish stems. I assume this species was introduced deliberately as an ornamental.
Posted by Alex SL at 11:38 PM No comments:

Currently doing field work in southern Queensland. We are primarily trying to find a certain rare species, but today we were not yet lucky. Part of the problem may be that the area is quite dry at the moment, but then again lots of other plants are out and in bloom, so maybe that is not the main issue. Particularly amazing was to me how many different species of mistletoes we have seen in a single day. Unfortunately I do not know any of the names yet, but some of them are quite pretty, especially considering the unspectacular Viscum album we had in Germany. 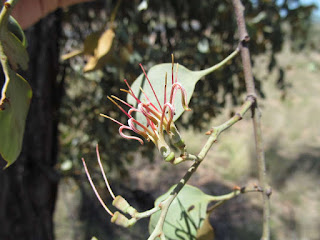 This one parasitised on an Acacia... 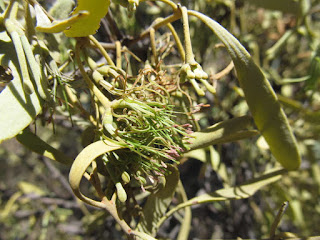 ...as did this green-flowered one here. 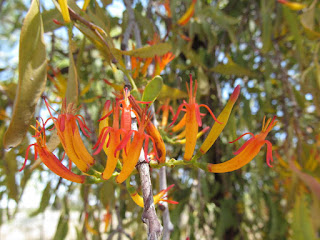 Certainly the most stunning species we found first on a Eucalyptus, but it did not seem to be very host-specific. 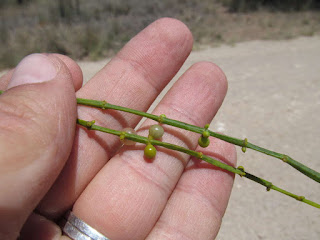 Finally, a single Allocasuarina tree had two species of mistletoes on it, of which I only show the weird leafless one. The other was similar to the first picture but with smaller flowers and long, slender leaves.
Posted by Alex SL at 12:08 AM No comments: 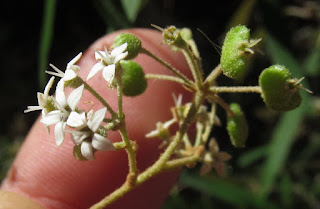 Currently proposal writing, travel preparations and having to move to a new apartment conspire against any decent blogging. Therefore another picture from our New England trip, Astrotricha longifolia (Araliaceae). The name means long-leaved star-hair.
Posted by Alex SL at 10:47 PM No comments:

A fast alert or a slow editor?

Okay, that is a first. My co-author and I just learned that we got a paper accepted not from a message from the editor but from my Google Scholar Alert on the topic we are working on. Apparently the journal published the abstract as "just accepted" on its website before even telling us that the manuscript was accepted. Weird.
Posted by Alex SL at 7:31 PM No comments:

Email ThisBlogThis!Share to TwitterShare to FacebookShare to Pinterest
Labels: publish or perish 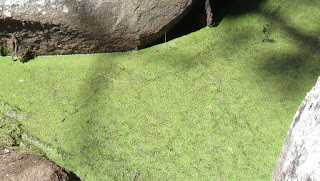 No time to write something substantial, so here is another plant seen on our recent holiday trip. I have long found floating plants fascinating; and one of the most interesting aspects is how quickly and drastically their morphology changes compared to their closest relatives. In the case of duckweed like the above species, they are part of the Araceae family and thus represent perhaps the most extreme example of massive reduction in size and complexity found in all the flowering plants. 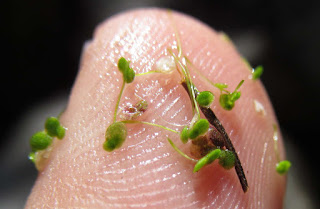 The species in this case is Lemna disperma. Or at least that is what the Flora of New South Wales suggests, I have not actually checked against a world wide key to the species of Lemna. The genus, however, is easily recognised. There are five genera of duckweeds, and simplifying a bit the really tiny rootless specks are Wolffia, rootless but larger and longish, often boomerang-shaped ones are Wolffiella, those with only one root per thallus are Lemna, and those with multiple roots are Landoldtia and Spirodela.

For those interested in more about the bizarre world of duckweeds, there is a tremendously detailed website available, although of course it has a bit of a focus on the country of its author.
Posted by Alex SL at 5:23 PM No comments:

We are back now, so this post will cover the rest of our trip in one go. 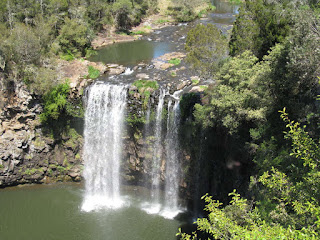 Another nice waterfall, the Dangar falls north of Dorrigo. Later we passed two more little waterfalls, Sherrard and Newell Falls, but they were directly on the Dorrigo-Bellingen road and thus not easy to photograph. 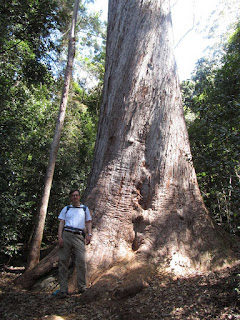 A theme of this last part of our trip was giant tree tourism. Above is the Giant Tallowood (Eucalyptus microcorys) east of Megan. A sign announced that it had a diametre of 3.14 m and a height of 56.5 m. I do not know what the virtues of its wood are, but the locals appear to consider the species to be very significant, as one can see a Tallowood Cafe and suchlike.

After spending a night in pleasant little Bellingen - the most hippie town I have ever seen in Australia - we were essentially on our way back. We left the New England area even in the loosest sense and drove south along the coast. But before driving through in a dedicated manner we spent some time in the vicinity of Laurieton. This is another town that I can only recommend - our motel, the Indian restaurant in the centre, and the surrounding landscape were all extremely enjoyable. 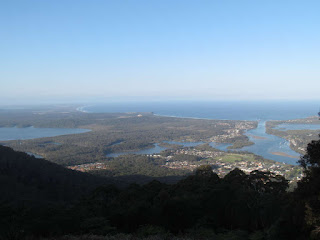 As for that landscape, the area has three forested hills that are so similar that they were named the Three Brothers. The above picture shows Laurieton as seen from the North Brother in Dooragan National Park. 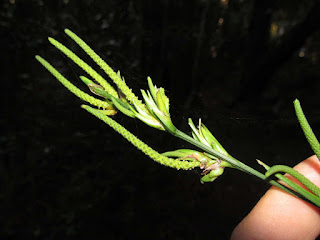 The rainforest on the southern slopes of the North Brother was amazing. I would not have thought to find strangler figs and well-developed Brettwurzeln (buttress roots) so far south of the tropics. There were massive tree ferns and slender palms, epiphytic ferns we had not seen before, and trees with wonderfully soft, corky bark. The picture here shows another very odd plant: Gymnostachys anceps. Although its overall habit immediately suggests a sedge, it is of the arum family Araceae. 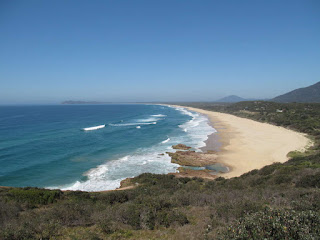 To give more of an idea of the overall landscape, this is a view from Donbogan Lookout in Kattang Nature Reserve, with the base of the North Brother just reaching into the picture from the right. 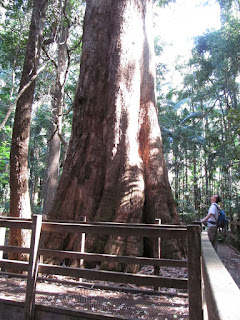 In Middle Brother National Park we then continued our giant tree tourism. Shown here is the Bird Tree, considered to be the largest tree in New South Wales by volume. Unfortunately there was no sign providing its measurements or species name... 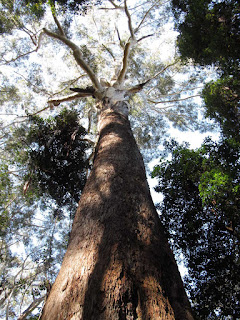 ...but it is surely an impressive specimen! Interestingly, there were quite a few other visitors, whereas the Giant Tallowood did not have any apart from us. Then again, that was during the week, and we saw the Bird Tree on a long weekend, so who knows.
Posted by Alex SL at 4:33 PM No comments:

We were without internet access for a few days, so this post is a bit behind the time; it covers Tuesday and Wednesday. We made our way eastwards of Armidale along the aptly named Waterfall Way and spent two nights at Thungutti Campground in New England National Park. Problem was, it is reasonably close to the peak of Point Lookout, a mountain of more than 1,500 m, so the nights were cold!

Anyway, there were indeed lots of waterfalls and nice lookouts. 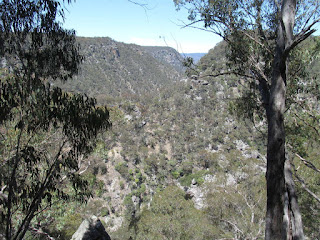 The first picture shows Gara Gorge as seen from the eponymous lookout. This is still near Armidale and fairly dry at the moment. 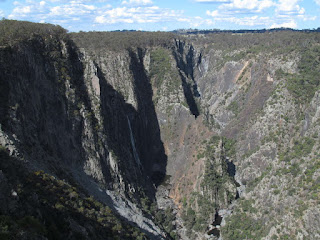 Here shown are the Wollomombi Falls in Oxley Wild Rivers National Park and the smaller Chandlers Falls to the right above them. Wollomombi Falls are considered to be the second tallest waterfall in Australia. 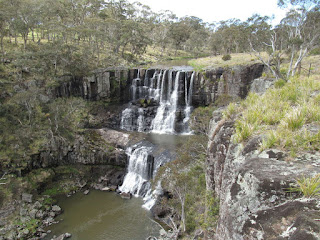 The other waterfall in this post is the Upper Ebor Falls in Guy Fawkes National Park. As the name implies there is a lower step further down; it seems taller but less photogenic. 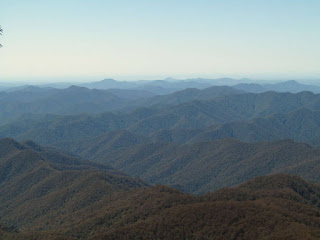 Back to forested slopes: A view from the summit area of Point Lookout. We were lucky with the timing, as some time later it got cloudy. 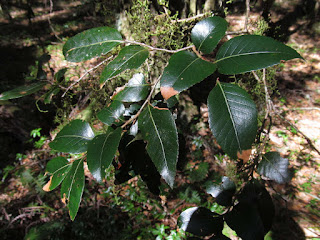 Finally, something botanical: Lophozonia moorei (= Nothofagus moorei, Nothofagaceae). This is the first southern beech I have seen that has large leaves like the northern beeches of the genus Fagus. The southern beeches I have encountered before - in Patagonia, Tasmania and New Zealand - all had very small leaves.