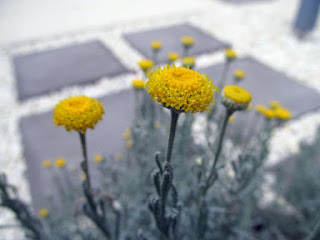 Just now flowering in our courtyard: Santolina chamaecyparissias (Asteraceae), in English known as cotton lavender although it is neither a cotton (Malvaceae) nor a lavender (Lamiaceae). A nice little shrub with extremely aromatic leaves:

It is said that the dried leaves can be used for potpourri and little bags to place between the clothes.
Posted by Alex SL at 1:51 PM No comments:

Do half the natural history specimens in the world really have the wrong name?

On Friday a colleague drew everybody's attention to a recently published study from Edinburgh and Oxford: Goodwin et al. 2015, Widespread mistaken identity in tropical plant collections, is presented in press releases and media as demonstrating that, to quote the University of Oxford's news page, "half the world's natural history specimens may have the wrong name".

As museum and herbarium specimens are used to extract DNA for phylogenetic and evolutionary studies, to draw distribution maps, to inform conservation decisions, and to examine spatial patterns of diversity, this sounds pretty dire. Luckily, in my eyes at least, this interpretation is totally over-hyped.

(Full disclosure: I know one of the authors of the relevant study, as he was involved in selecting my Diplom thesis topic and allowed me to join a field trip he had organised.)

My first reaction to reading the sensationalist headline was that perhaps they are talking about insects, which account for the vast majority of natural history specimens. That would have sounded at least remotely plausible given how difficult insect identification is and how few entomologists there are. It turned out, however, that the study was dealing with plant (herbarium) specimens.

My next thought was simply, no way; just looking at the herbarium I am working at the situation is nowhere close to that bad. 5% perhaps, okay. So how do they arrive at these seemingly shocking numbers?

The problems I have with the way these results are discussed fall into three categories: selection of example cases, hasty over-generalisation, and equivocation on the term "wrong".

Yesterday morning I had the pleasure of presenting a talk on the daisy family Asteraceae to the Biennial Conference of the Australian Native Plant Society Australia* (ANPSA). It was the first time I have been at a conference that wasn't either political or scientific, and I found it interesting how it compares to our scientific society meetings such as the upcoming annual conference of the Australasian Systematic Botany Society (ASBS), which will also take place here in Canberra.

At the ASBS, we will have one field trip on the day after the conference. At the ANPSA, they have several field trips (excursions) every day throughout the week, although admittedly they do not go as far away.

Clearly priorities are slightly different - native plant enthusiasts can hardly be expected to get together every two years and not prioritise looking at native plants.

Anyway, at least one of the members must be into ceramics and pottery. Each invited speaker was given a little customised vase; at least two of us (including me) did not even remember that the society contact asked us months ago what our favourite plant was. It is hard to pick just one, but I now dimly recall that I nominated Actinobole condensatum, because this is what the artist, known to me only as Franzi from her signature on the vase, did: 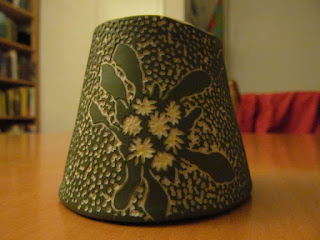 And here, for comparison, a picture of Actinobole condensatum I took during a field trip to Western Australia in 2012: 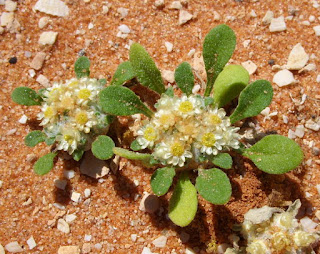 It is a great impression and abstraction, getting across a good likeness of the species. And the species is really a super-cute desert ephemeral. The plants are very tiny and short-lived, but they produce a dense, attractive cluster of small but typical paper daisy heads. The red sand on which they like to grow does its part to make for an aesthetic impression. 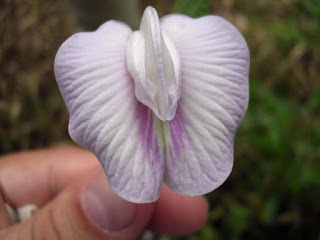 Sigh. Just too tired these evenings to write anything, and then Paris... so just another nice plant for the moment: A Clitoria (Fabaceae) from eastern Bolivia, 2007. Don't know the species name unfortunately, but it should be clear where the genus name got its inspiration. And yes, it is the right way up, the flowers of this genus are generally resupinate.
Posted by Alex SL at 9:49 PM No comments:

The historicity of Jesus

One topic that regularly comes up in parts of the blogosphere I read is whether there was a real human being at the root of the Jesus character of the Bible or whether, alternatively, such a person never existed. What the alternative looks like in detail is a bit unclear and depends on who is arguing; one of the favourites seems to be the idea of Jesus as originally a divine being in some other realm. Then the gospels were written as allegorical teaching material or fantasy novels, and a few generations later all Christians had weirdly forgotten that those were only novels and became wrongly convinced that Jesus had actually walked the earth.

Both those who argue for an entirely mythical Jesus and those who see a real life human doomsday cult leader at the root of Christianity make their cases with a lot of conviction, in fact with so much certainty that one would usually assume they must be really sure that they got it figured out. Unfortunately, again, both sides do so, and I am clearly not qualified to evaluate the Ancient Greek source material and suchlike.

For what it is worth, I lean towards the assumption that there was a human cult leader named Jesus (I understand it would then have been something like Yoshua?) at the root of Christianity, obviously in my personal opinion without any actual virgin birth, divinity, resurrection or other miracles involved. My main problem with the mythicist position is that it seems really hard to explain the content of the gospels under their hypothesis. Just to pick the three first items that pop into my mind, and of course none of these thoughts are original to me:

The official golden everlasting, likely the economically most important ornamental daisy native to Australia, is Xerochrysum bracteatum. Here around Canberra, however, we have its congener X. viscosum, which has narrower, slightly sticky leaves. 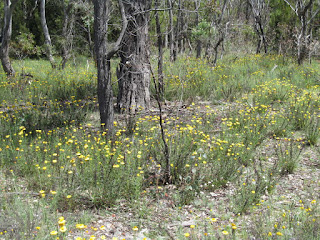 Although X. bracteatum gets all the attention, I have always thought that X. viscosum is equally pretty, and of course if you want a paper daisy in your garden in Canberra it would probably be the better choice because it is well adapted to the local soil and climate. 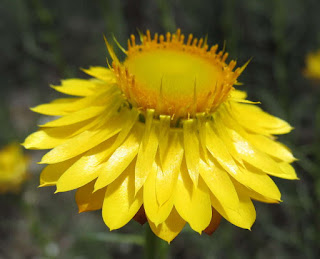 What is missing are, of course, all the strange colour variants that X. bracteatum has been bred into. Xerochrysum viscosum is pretty much yellow, that's it. Or is it? 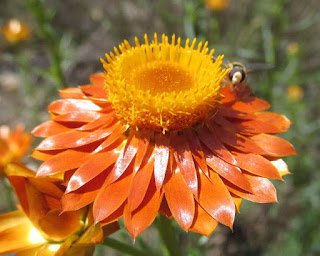 What prompted me to choose this species for the present post was that today, during our morning walk, we happened upon the above orange form. It was just one plant among hundreds of yellows, but certainly this kind of occasional sport must have been the basis for the breeding that was done in its better known relative. So there is potential; who know what other colour forms may crop up here and there?

Reading Stormfront, Book One of the Dresden Files

The last three weeks have been a bit full; first field work, then meeting, then moving house, and then a bad cold. But although we are still sitting between boxes waiting to be unpacked, I finally feel like writing something again.

At the last Lifeline book fair I bought a couple of books. Let's start with the first I read, Jim Butcher's Stormfront - Book One of the Dresden Files. Minor spoilers obviously ahead.