As usual, the following is entirely my own opinion and not that of anybody else or any institution I am affiliated with, and I am obviously not writing in any official capacity.

Right now the media, social and traditional, are full of the personal tragedies caused by the new US president's executive order barring immigrants and refuges from selected Middle Eastern countries from entering the USA. According to reports in major newspapers, the order is interpreted to mean that even people who have permanent residency status in the country are currently not being allowed to return from holidays, refuges who have already been accepted are told they can't come after all, and scientists are turned back as they are about to start or continue research projects at US American universities. Furthermore, the order says to prioritise Christian refuges over Muslim ones.

I am certainly not a scholar of the US legal system, but it seems rather obvious to me that the order would have to be somewhere between unconstitutional and illegal. One reads that there is even a law that outright prohibits discriminating against immigrants based on their nation of origin.

Be that as it may, I feel for the people who are personally affected by this act. But more generally I hope that people around the world are looking at what is unfolding politically at this time, both in the USA and elsewhere, and taking away a few lessons.

Email ThisBlogThis!Share to TwitterShare to FacebookShare to Pinterest
Labels: politics 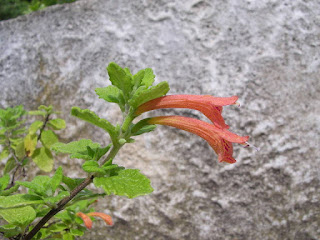 Apparently I currently do not have anything major to post about, so here comes another plant: Gardoquia tomentosa (Lamiaceae), Botanic Garden of Goettingen, Germany, 2004. The plant is from Ecuador, if memory serves, and it is part of the New World radiation of the aromatic Mentheae tribe. The genus name is actually currently not accepted, although it once used to refer to the bright red to orange-flowered, bird-pollinated members of the clade. I believe these species are officially still in Clinopodium, although that doesn't make any sense either given that Clinopodium proper is restricted to the old world.
Posted by Alex SL at 5:06 PM No comments: 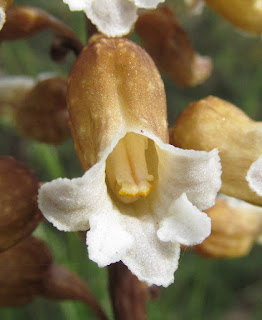 Among the many nice plants we saw on our recent weekend trip was also this orchid, Gastrodia procera (Orchidaceae). It is fully parasitic, without any green leaves. The species was apparently only described as new to science as recently as 1991.
Posted by Alex SL at 9:11 PM No comments:

A new phylogenetic classification of ferns 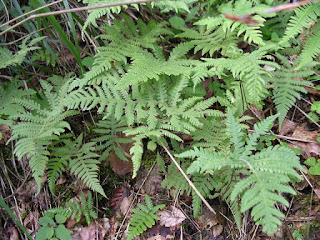 Just a couple days ago a new, phylogenetic classification of ferns and lycophytes was published. In parallel with the well-established Angiosperm Phylogeny Group, the authors call themselves the Pteridophyte Phylogeny Group.

I was happy to see that publication for several reasons. The PPG includes several people I know or am friends with, so good for them. As mentioned, the classification is sensibly phylogenetic, so good for science. And personally I have a great (although non-research) interest in ferns, so I find it simply good to get this update.

So, what do we learn? What is the state of the art?

The lycophytes are well established as sister to all other vascular plants, and the main groups Lycopodiaceae, Isoetaceae and Selaginellaceae are not in any doubt whatsoever. What surprised me was the degree to which the Lycopodiaceae have been atomised into numerous mid-sized to monotypic genera. I have no idea what degree of divergence is recognised in this subdivision, but it seems a bit odd next to the Selaginellaceae with their single large genus.

The remaining groups are forming together what was so far known to me as the monilophytes, but here they are called Polypodiopsida. They are sister to the extant seed plants.

A monilophyte group that I am particularly fond of are the horsetails (genus Equisetum), here ranked all the way up to subclass. Pity there are none native to Australia. Next are the morphologically reduced Psilotales with their traditional genera Tmesipteris and Psilotum, again nothing unexpected.

Sister to them are the odd Ophioglossales, which, however, present the very same surprise as the Lycopodiaceae. I thought I knew them as featuring four easily explained genera: Ophioglossum with usually undivided fertile and sterile parts of the frond, Botrychium with pinnately divided leaves, and the somewhat palmately divided and monotypic Helminthostachys and Mankyua, the latter only described in 2002 and endemic to one Korean island (!). But the two larger genera are here divided into several genera, a tradition that I apparently was completely unaware of.

The last eusporangiate group are the Marattiaceae, a clade of large tropical ferns that had its heyday in the Carboniferous. As far as I can tell the classification is not much changed from what I read years ago.

Finally, we have the large diversity of the leptosporangiate clade. Many groups I am insufficiently familiar with to appreciate any potential changes in classification, but the higher level structure is well known. There is a grade of smaller groups - king ferns, filmy ferns, Gleicheniaceae & relatives, Schizaeaceae & Lygodiaceae, water ferns and tree ferns - and at its end the speciose Polypodiales clade, where it really gets complicated.

Apart from a few Polypodiales families that have piqued my interest, like Aspleniaceae or Dennstaedtiaceae, I really have no even half-informed opinion here. The point is that I can now use this new publication as a tour guide to figuring out where in the system I am when I next run into one of those generic, large-fronded, rosette-growing round ferns.

The Pteridophyte Phylogeny Group 2016. A community-derived classification for extant lycophytes and ferns. Journal of Systematics and Evolution 54: 563-603.

Weekend in the Mountains

The past four days have once more seen the men who have a fondness for vehicles hold their annual meeting in Canberra, and to escape the noise and burnout related smells in our suburb we headed for the mountains, as we have done several times in the past. We camped at Three Mile Dam in Kosciuszko National Park, but as I have posted about that area before I will instead focus on what we saw on our return journey through Namadgi National Park. I may post some of the other plants we saw as botany pictures though, and there were many. 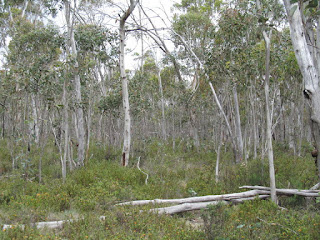 This was the first time we explored Shanahan's Mountain Walking Trail, although we did not go all the way. The area appears very nutrient-poor. Trees are a bit on the stunted side, and there are many individuals from groups that appear to cope well with nutrient deficiency, such as Fabaceae with their symbiontic bacteria or Proteaceae. 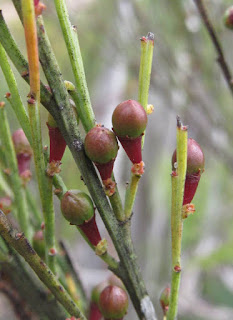 Another strategy is to steal nutrients from others. The above is Exocarpos strictus (Santalaceae), a hemiparasite, meaning it taps neighbouring root systems but still does its own photosynthesis. Seen here are its developing fruits, whose pedicels (stalks) are turning fleshy and red instead of the fruit wall itself. 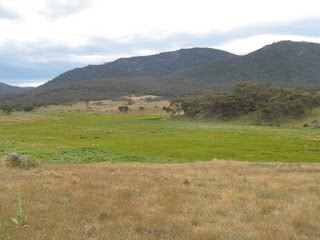 Our last stop was at Yankee Hat Walking Trail, but we did not have time to go as far as to the Aboriginal rock art. We turned around at Bogong Swamp, perhaps a bit less than half way. It should not be difficult to tell where the swamp is in the picture above. 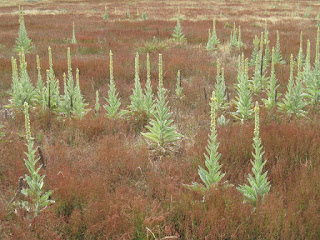 On the way there were large populations of introduced Verbascum (mullein, Scrophulariaceae), the silver-green foliage standing out particularly starkly against the brownish background of likewise introduced Acetosella vulgaris (sorrel, Polygonaceae). This combination was fascinating. 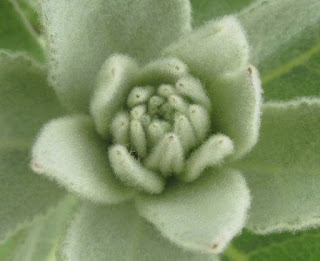 Some species of Verbascum, and this one among them, have amazingly hairy leaves. In Europe there are apparently solitary bees that collect these hairs to wallpaper their nests. 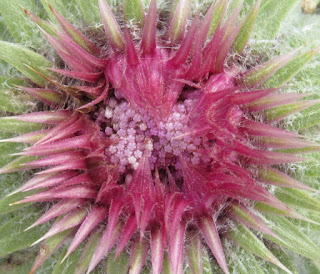 While on the topic of introduced weeds, this thistle (Asteraceae) does not only show a nice play of colours but also the flowers of its flower-head still in the bud stage, each appearing as a little five-armed star.
Posted by Alex SL at 10:09 PM No comments:

Happy new year, everybody! Although many people are variously fed up with 2016 for the supposedly high number of celebrity deaths, Brexit and the US election, for me personally the past year was very enjoyable and successful, so I cannot really complain. Let's hope that 2017 will at least be better than so many of us expect.

Anyway, quite some time ago I wrote a series of posts on species concepts. Because a reviewer mentioned it, I had now reason to look into a concept that I was not familiar with, that of ochlospecies.

It was apparently developed by a tropical tree taxonomist called White in the 1960s, but the most useful source that is available online appears to be a 1998 review by Q.C.B. Cronk.

The idea is that there are different kinds of species that can be distinguished based on their patterns of variation. There are well-behaved, very distinctive species. There are species that are variable but in a way that is easily understood, for example because variation is nicely hierarchical, because several characters show correlation, or because there is a clear geographic pattern. And then there are the bad apples, species that show variation but without any clear structure. Several crucial characters appear to vary independently, no geographic pattern, just a mess. Those are then the ochlospecies.

What do I take from this?

Well, first to me this is a rather unexpected way of going about species concepts. The whole point, as far as I am concerned, is that before you embark on a taxonomic study you should set up clear criteria of how you will evaluate the evidence that you are going to collect.

When I look at the ochlospecies, however, it looks to me as if it is not a criterion but a conclusion. Reading the Cronk review, it appears as if the taxonomist circumscribes species somehow (magical asterisk) and then labels some of the resulting species as ochlospecies after the fact. At a minimum that means that the concept has a different utility, if any, than the species concepts I have considered previously, than that of serving as a potential guideline.

So at the moment I am a bit at a loss as to what to do with the concept regarding my paper. As the concept is not directly useful methodologically, my options seems to reduce to name-checking it either in introduction or in discussion.
Posted by Alex SL at 9:23 PM No comments: