Today I have tried for the first time to use the SVD quartet method for inferring species trees from Single Nucleotide Polymorphism (SNP) data. This also marks my first foray into the new PAUP test versions.

In case it is unclear what this is about, the situation is that you have several samples per species and genome-wide SNPs for each of them, and you want to infer the species tree, that is a phylogeny that has species instead of your samples as the OTUs, under the assumption of the coalescent model. This post thus ties in with my previous posts on species tree methods for multi-locus data and the Bayesian approach to species trees from SNPs.

And just like those it will not at all be about the theory but about how to do it in practice. For those who fancy dozens of pages of mathematical formulas, the developers of the method, Chifman & Kubatko, have provided the background on arxiv. For the moment, however, I just wanted to try it out.

The newest version of the SVD quartet method is implemented in PAUP, so head over there and download it. I am using Linux, so I have to use the command line version, but that is okay. The main work of setting up a nexus file cannot be avoided anyway.

Email ThisBlogThis!Share to TwitterShare to FacebookShare to Pinterest
Labels: how to, methods, species trees 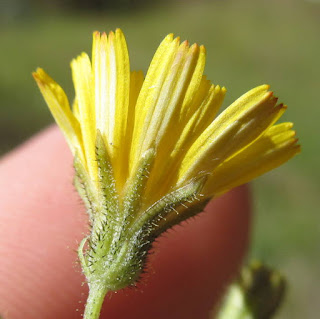 Another plant from our recent weekend in the mountains: Crepis capillaris (Asteraceae), an introduced weed in this country. Note the gland-tipped hairs on the bracts and peduncle. I had already seen it last year but had no fruits for secure identification. Now that I have identified it I wonder why I didn't recognise it, as it also occurs in Germany, and it was the first species of its genus that I collected as a student. Perhaps I just didn't expect it here, and then I was blinded by the hope that it might be something more interesting. Well, from now on I will expect and recognise it.
Posted by Alex SL at 10:17 PM No comments:

Patrocladistics 3: The logic behind it

After looking at what patrocladistics is, how it works, and what happens if we add intermediate ancestors, this third and last post on the method is dealing with the underlying justification. Some throat clearing seems appropriate: what do I mean with justification?

I am interested in two questions here. The first is the justification for doing something at all, or, to be perhaps more precise, the justification for believing that an activity is conductive to a given goal. Assume, for example, that you are paying a company to build a house for you. One day you walk past and you notice that the builders do not actually seem to be raising any walls, instead they are sitting around a sandpit playing with mud pies. The question is now why they are playing mud pies. You are paying this hour's work in the belief that it goes towards your house - how does this further the undertaking?

Now maybe there is a good reason. Perhaps the foreman could reply that you are not actually looking at mud pies but at a revolutionary new brick-making technology. Who knows? But if he just replies, well, we fancied making mud pies, then you would most likely not consider that to be a very good justification, because there is no connection between that answer and the goal of getting your house up. Similarly, if we want to build a sensible classification, we need an approach that is justified as logically leading to a sensible classification, and not just an answer on the lines of, well, we fancied the result this approach produces.

I should also add that I am not really interested in trying to invent a justification myself, or in examining some post-hoc rationalisation that a completely different pro-paraphyly taxonomist may have developed several years later. I am primarily interested in how the paper originally presenting patrocladistics to the community justified the approach.

The second question is why the analysis should be conducted in the very specific way suggested by the authors, independently of the answer to the first question. In the case of the builders, regardless of whether they have convinced you of the virtues of mud pies as a replacement for bricks, you may still ask why they would be using chopsticks to form their mud pies when little shovels or even spoons would perhaps be more efficient. In the case of patrocladistics, I will likewise temporarily put aside the issue of whether it makes sense and ask if any justification is provided for the specific way in which patrocladistics are conducted in the paper.

It is interesting that a few weeks after learning that at least some proponents of paraphyletic taxa argue that phylogenetic systematics is structuralism two science bloggers I am following have started to discuss what structuralism is and what its merits are. The problem is, I am getting more and more confused about the first of those questions.

Once more I have received a piece of science spam that I find outstanding in its silliness.

Are there people somewhere in the world who talk like that? You come to work in an office in Hyderabad, and instead of "శుభోదయం" people say, "ప్రత్యేక శుభాకాంక్షలు"?


The idea is to present originally contributed research, review, case reports papers, mini review, short communication or any perspective from leading researchers in the field of Peertechz Journal of Biological Research and Development Focus.


Peertechz Journal of Biological Research and Development is a peer reviewed open access journal, aims to publish high quality basic and clinical research in all the disciplines related.


I did not know that 'full text', for example, is a file format. Learn something new every day.


We request your continues support towards the growth of the Journal success.
We look forward to seek your positive response.

I think at this stage we have given up on the whole idea of writing meaningful sentences and arrived at empty flowery phrases.


Please Note: This is not a spam message and has been sent to you because of your eminence in the field.


This email and any attachment may contain private and confidential information. Do not share without Peertechz.com's approval.

Perhaps somebody who doesn't want the confidential information contained in "special greetings" shared shouldn't send it out to thousands of people as spam.

Oh, it is dangerous to go to the Lifeline Book Fair. Within one hour, I picked up the following:

Dawkins R., Climbing Mount Improbable. Had been hoping to get that one for quite some time.

White M.E., The Greening of Gondwana. Large and lavishly illustrated palaeobotany tome, a bit out of date though.

McCrumb S., Bimbos of the Death Sun. This is not what it sounds like but a rather funny satire / crime mystery combo that I had heard of before.

Howard R.E., The Conan Chronicles Volumes 1 & 2. Classics! Who can say anything against classic literature, right?

Akers A.B., The Suns of Scorpio. Okay, this, however, is probably exactly as high-brow as the title sounds. The cover compares it to Burroughs' Barsoom novels. But it was only $1, so hey.

This is in addition to children’s' books and two games for the daughter and various books the wife bought yesterday and today. Where to store all this?

Have got to go through the shelf and find a few old books to donate in turn...

Email ThisBlogThis!Share to TwitterShare to FacebookShare to Pinterest
Labels: miscellaneous

Patrocladistics 2: What if we include ancestors?

Last post we looked at what patrocladistics is and how it works. The example case was not a real group of organisms but contrived, but it was perhaps typical in that the dataset only included extant species.

In this post I want to explore what happens to the results of a patrocladistic analysis if we add all the ancestors. There are two reasons why this is of interest to me:

First, I believe that like many other ideas for the objective delimitation of paraphyletic taxa patrocladistics relies on not having intermediate ancestors in the dataset. Not all, perhaps, but many such approaches identify a long branch or gap in variation. The problem is that such a long branch or gap is merely an illusion based on the patchiness of the fossil record. In reality, evolution is gradual. And if somebody claims to have a good approach to classification it could be argued that it should be able to deal with the discovery of intermediate fossils.

Second, proponents of paraphyletic taxa often criticise phylogenetic systematists for supposedly ignoring ancestors, or for supposedly defining them out of existence. If patrocladistics does, as I suspected, rely on the absence of ancestors, that might at least be seen as a bit ironic.

So back to our artificial phylogeny. It contains two outgroup species and five ingroup species, two of the latter on a very long branch:

Patrocladistics 1: How does it work? And a contrived example

As the approach is often mentioned in pro-paraphyly publications as an objective method of delimiting paraphyletic taxa, I thought I should look into patrocladistics again and examine it in a blog post or three. In the following I will approach patrocladistics from three different angles:

1. What is patrocladistics and how does it work?  This is very straightforward.

2. How does the patrocladistic approach perform when ancestors are added?

It is often easy enough to explain how something works in the abstract, but it is perhaps more enlightening to throw different problems at a method and see under what conditions it is more or less useful or may be mislead. For example, explaining how BEAST does its phylogenetic inferences does not necessarily by itself tell us how it will perform when faced with, say, 25% missing data. I often criticise the pro-paraphyly movement for what I see as their reliance on the fortuitous absence of intermediate fossils to separate out paraphyletic groups. Conversely, members of that movement have a tendency to criticise cladists for supposedly ignoring ancestors. So in the case of patrocladistics, I wanted to see what happens if the method is provided not only with extant taxa but also with ancestors.

3. What is the rationale behind patrocladistics?

In other words, if somebody who is agnostic about the whole phylogenetic versus 'evolutionary' systematics issue were to ask why they should do a patrocladistic analysis, or what the biological or philosophical justification for such an analysis is, what would the answer be?

Weekend in the mountains, and botany picture #224: Podolepis robusta

We spent the weekend in the mountains, to make use of the weather as long as it is still warm and dry. 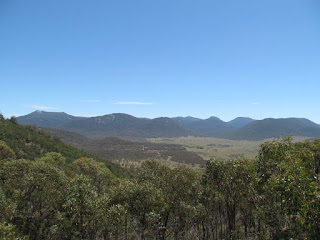 View of the ranges of Namadgi National Park from Hospital Hill Lookout. 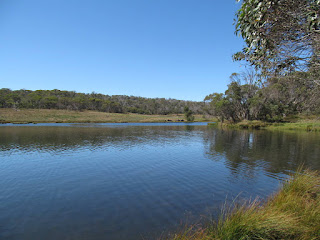 Above a part of the lake of Three Mile Dam. We stayed the night on the local camp site. 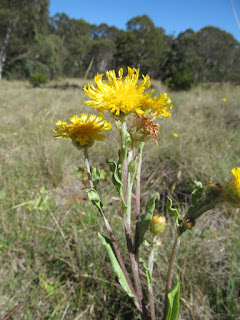 Podolepis robusta (Asteraceae) on grassland along The Link Road. Podolepis is part of a lineage of daisies that has ancestrally lost the zygomorphic ray florets of most of the family... and is now in the process of re-inventing them. It hasn't quite settled on a fixed number of teeth yet, but what it has achieved so far was apparently enough to confuse at least some botanists of a few decades ago. Looking into the older floras, one sometimes sees the genus treated next to Astereae like Olearia and Brachyscome, in other words among generic daisies with ray florets, instead of near its actual relatives, the everlasting paper daisies. 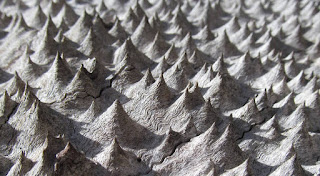 As seen on the trunk of a long-dead Eucalyptus. Weird.
Posted by Alex SL at 9:26 PM No comments: