A few weeks ago we discussed a paper in our journal club that used dinosaur silhouettes in its figures and referenced PhyloPic as the source. So today I finally decided to check the website out.

PhyloPic is a repository of black/white silhouettes of organisms across the tree of life. The idea is that everybody can sign up and submit their artwork under some kind of creative commons or public domain license, and everybody can use the silhouettes to do just what the authors in the aforementioned paper did: decorate phylogenetic tree figures in publications or talk slides, educate, etc.

The idea sounds great, so I played around a bit today to see how well it works. The experience was, alas, a bit mixed.

Some spam bot seems to have discovered this blog, and it is getting annoying. Consequently I have just turned comment moderation on. I don't think it will make a lot of difference to readers of this blog. Discussions or questions happen, but they are rare.

Most people seem to find my blog when googling for one of the topics I have covered, especially phylogenetic systematics, the aromatic plant genus Minthostachys, the various posts on how to use this or that software tool or method, and, somewhat more to my surprise, three very specific posts on acknowledging peer reviewers, ResearchGate, and bracketed versus indented keys.

And that was always the idea: I don't expect to host any long discussions about paraphyletic taxa here, but maybe somebody will find some of my perspectives, information and how-to's useful. Comment moderation won't interfere with that, but it will make sure all those gibberish comments ending with links to health supplement sellers won't get through, and that's a plus.

Email ThisBlogThis!Share to TwitterShare to FacebookShare to Pinterest
Labels: miscellaneous 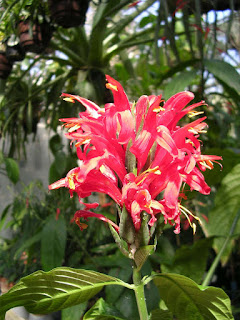 At the moment I can't find the energy to write anything substantial, but I can just fill the blog with plant pictures that I have taken over the years. Here is another pretty Acanthaceae - a family that I have quite a lot of photographs of. Pachystachys spicata, originally from northern Bolivia, but in this case photographed at the Botanic Garden of Goettingen University. It is a weak-stemmed, scraggly shrub, and the flowers are obviously meant for hummingbird pollination.

Yellow-white Pachystachys lutea is more widely known and more often seen in botanic gardens, but I like the above species better.

One thing that gave me a bit of a culture shock after coming to Australia was the way in which plant taxonomists work here compared to how I had been trained by European and North and South American taxonomists.

Cracked explains what is wrong with science - or tries to

Sometimes I really wish people who try to write very confidently about a subject would at least make a token effort at trying to research the topic first. Or, failing that, perhaps because they don't have the time, at least try not to sound so damn Dunning-Kruger about it.

5. Scientists not having to make the data underlying their studies available.

4. Scientists having to pay publication fees, which creates perverse incentives and restricts access to publication venues for scientists from poorer countries.

2. Scientists being forbidden from giving out reprints of their papers because they signed over the copyright to aforementioned publishers.

Except for the first point (#6), all of this is either misleading or self-contradictory.

Email ThisBlogThis!Share to TwitterShare to FacebookShare to Pinterest
Labels: publish or perish, science

So, about this cycad I mentioned the other day. When I was a student in Germany, cycads were these really weird plants form the dinosaur age of which you may see one or two in the greenhouses of the botanic gardens. Exotic, rare, spectacular.

Here in Australia, I drive an hour and a half to the east where it gets a bit wetter and milder, and the whole forest floor is covered in them.

But yes, they were more diverse and abundant during the Mesozoic, and they appear to be a bit odd just because there are so few of them left. Essentially they look like a cross between a palm and a conifer: on the one hand they have large, pinnate leaves and fat, un- or rarely branched stems, on the other hand they are gymnosperms, carrying their ovules and thus their seeds freely on the surface of specialised leaves that are generally arranged in cones. 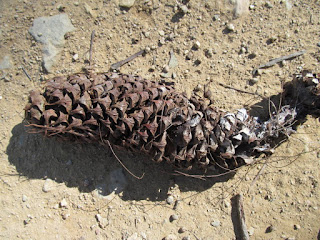 The above is a male cone of Macrozamia communis. I placed it on the dirt road for photographing because there was little light in the understorey. 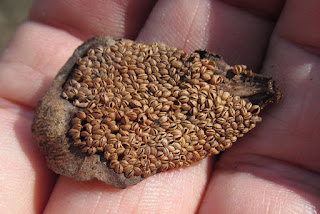 The individual microsporophylls - the male leaf organs that are homologous to stamens in flowering plants - have large numbers of scattered pollen sacs. A far cry from the regularly four pollen sacs on the familiar, small angiosperm stamens. 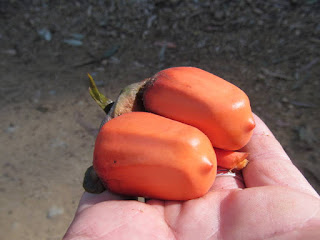 I had seen and photographed male cones before, but our little stroke of luck on the recent field trip was to come across a mature female cone so that we could discuss it with the students. The megasporophylls have a long petiole, a spine at the end, and two ovules. Pollination success seems to be extremely high.

I have not observed it myself, but I am being told that these plants are actually insect pollinated. Apparently they warm up their cones in the evening and attract large numbers of beetles that spend the night there. 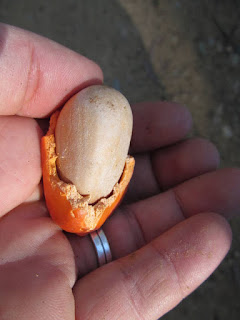 The outer coat of the seeds is kind of plasticy-spongy and orange-red, indicating that it is probably meant to be eaten to disperse the seeds. However, according to ANU professor Mike Crisp there is no native animal that does eat them; it is possible that the dispersing agent was part of the extinct macrofauna of the continent.

That being said, one of my colleagues mentioned over lunch that feral pigs supposedly eat them. If that is the case, and if the seeds come out undamaged, the plant may have found a new dispersing agent.

Today I and a colleague from the ANU supervised a group of students while they tried to identify seven species of Acacia (Fabaceae) using different types of keys. On offer were the book version of the Flora of New South Wales with its traditional dichotomous key, the online version of the same flora using pretty much the same dichotomous key, and the Lucid based Wattle Key, which is multi-entry.

I have written about dichotomous versus multi-entry keys before. The purpose of today's course was three-fold: to learn something about Acacia, as it is a very important and iconic part of the Australian flora, to become confident at using identification keys, but also to form a personal opinion on which type of key one would be more comfortable with. In other words, I encouraged the students to try both variants. I found the travails of some of them most informative, even more so than last year when we did the same course (perhaps because then I was more busy - the course was then twice as large).

Back home after a weekend trip to the coast with ANU students. 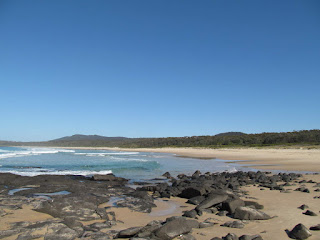 In the morning we spent some time at the beach front of ANU's Kioloa Coastal Campus, discussing grasses, saltbushes, Myoporum, Banksia and Pittosporum. 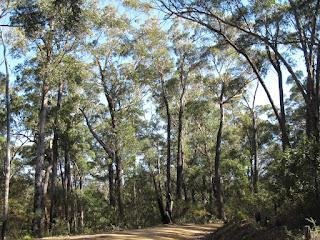 On the way back we had an extended stop at Misty Mountain Road in Monga National Park, one of my favourite national parks in the area. We explored a bit of sclerophyll forest with diverse heath-like understorey. 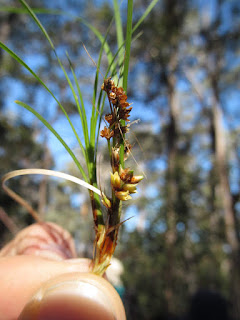 One of the plants there was this rather tiny Lomandra. The tufts of this monocot looked superficially like grass, and the few flowering stems were well hidden. The more familiar representatives of Lomandra, those that are used as low maintenance ornamentals, are considerably larger. 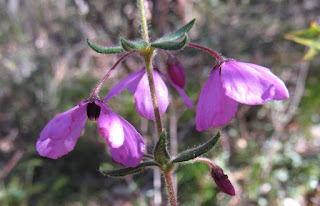 Although not part of the plant groups that I am usually keen of, I find Tetratheca (Elaeocarpaceae) really attractive. They also make very nice herbarium specimens, drying well and staying very colourful. Above is T. thymifolia with its characteristic whorled leaves and long, non-glandular hairs on the stem.

I also got really nice pictures of a female cycad with ripe seeds, but that is worth a separate post.

After the recent reconnaissance trip to the Australian National University's Kiola Coastal Campus, I am currently on the student field trip that we were then preparing for. 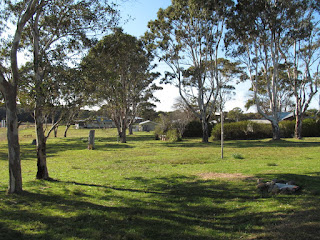 The weather is perfect for bush walking as well as photographing. The above picture shows part of the Coastal Campus with several of the cottages in the background that are used for accommodation, teaching and research. 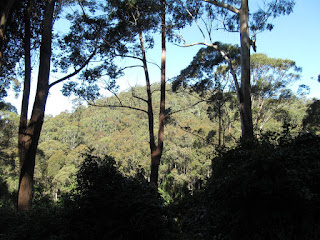 Today we spent most of the day in the forested two thirds of the campus. Above a picture taken in the rainforest part. The rest of the day was then spent identifying plants and preparing student talks. 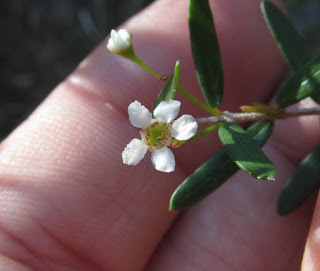 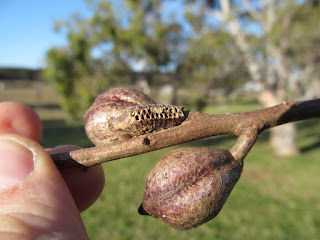 Hakea (Proteaceae) "pods", really follicles, with an insect's egg casket cunningly hidden on them; note how the colour blends in nicely. Probably the egg casket is a praying mantis' ootheca. This was discovered by one of the students. 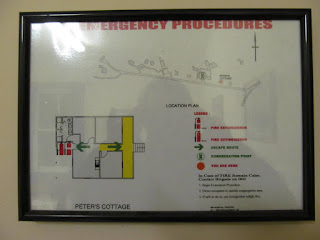 Australian Health and Safety procedures: This picture shows an evacuation plan for a cottage with four rooms, a single straight corridor and an exit at either end. I strongly suspect that if I were too panicked or confused to figure out on my own how to flee from such a simple building I would certainly be too confused to read the plan. 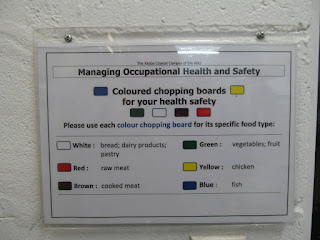 Also, "coloured chopping boards for your health and safety". Truly I have never seen something like this before, and one immediately wonders how the people fifty years ago (or 5,000 years ago) managed without colour coded chopping boards.
Posted by Alex SL at 10:18 PM No comments: 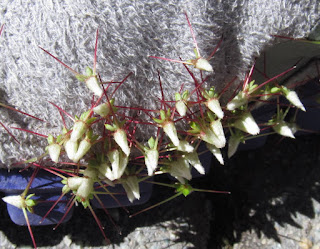 Today I gave a lecture on fruit and seed morphology, with a few words on dispersal syndromes at the end. In that spirit, today's botany picture is an example of exozoochory in action: Acaena (Rosaceae) fruits stuck to somebody's shoe in Kosciusko National Park, January 2015.

Actually, perhaps I should have included this picture in the presentation.
Posted by Alex SL at 9:48 PM No comments:

Vicariance and parsimony in biogeography, continued

On and off I have read a few more of the papers from the late 1980ies and 1990ies dealing with vicariance biogeograhy and searching for ways to apply that (then still) awesome new idea of parsimony analysis to biogeography.