What are monotypic genera good for?

I would argue that there are two different scenarios to be considered. First, however, we need to keep in mind that:
This may at first suggest that there is no good argument to be had against monotypic genera either. If ranking is arbitrary then a classification consisting entirely out of monotypic genera - each species in the tree of life gets its own genus - is just as valid as the current one, so why not?

It is true that this is one of many possible ranking solutions compatible with phylogenetic systematics, but to decide between those many possible ranking solutions we can bring other criteria to bear. And here I would argue that it would be useful to minimise the number of monotypic genera as far as possible. Why? Because I would consider the genus level 'wasted' in many of those cases.

Consequently, I believe that the proper use of monotypic genera is for when they are actually required for phylogenetic classification, but that there is a good argument for sinking them into larger genera whenever things could be made monophyletic without them. Two examples may illustrate the argument.

The above presents a case where the monotypic genus in red is actually needed. There are two genera marked in blue and green, and so obviously the phylogenetically isolated lineage in red cannot be lumped into either of them without making them paraphyletic. It is 'left over' and needs its own genus. 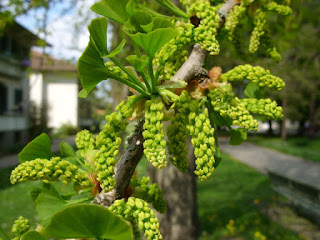 A perfect example for this is the ginkgo tree, Ginkgo biloba, which is a phylogenetically isolated living fossil. It is here photographed as an alley tree in front of our apartment block in Zürich, back when I was a postdoc there.

In the above phylogeny, however, the monotypic genus in red is sister to another genus in blue, and that latter genus isn't very large either. Now I can understand why it might perhaps be desirable to recognise the two as different genera if their divergence happened many tens of millions of years ago and they are morphologically quite distinct. Unfortunately, however, the world is full of monotypic genera that are very young and look exactly like the slightly larger sister genus, but differ from it in a single morphological character.

In those cases, do we really need that kind of taxonomic inflation? What then is the use of the genus rank? 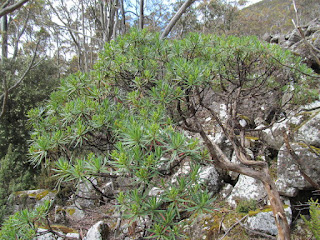 The species that occasioned these ruminations in me is the above Tasmanian daisy tree Centropappus brunonis, which is clearly just a Bedfordia without hairs on the leaves; otherwise the two genera are pretty much indistinguishable. And Bedfordia itself has a mere three species, so it is not as if it would get unmanageably large if they were united.

There are many, many similar cases.
Posted by Alex SL at 10:16 PM No comments: