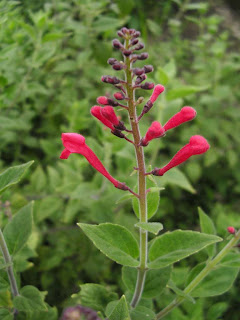 Scutellaria ventenatii (Lamiaceae), Botanic Garden of Bogota, Colombia, 2007. The skullcap genus Scutellaria is perhaps the easiest to recognize of all Lamiaceae because of its very distinct calyx. It is two-lipped, both lips are smooth (i.e. the five calyx teeth are not really distinct any more), and there is generally a scale-like protrusion on the upper lip. The calyx closes around the fertilized ovule; when the seeds are ripe, it dries out and the upper calyx lip falls off, like a lid. This species is, like many other of its striking South American congeners, clearly hummingbird-pollinated, but the northern hemisphere species are generally bee-pollinated.
Posted by Alex SL at 7:46 AM