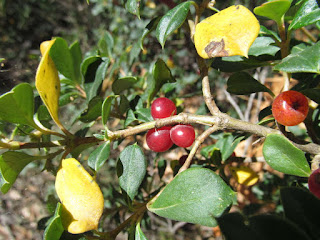 Wanted to write something, but too tired now. Instead: Coprosma hirtella (Rubiaceae), Australian Capital Territory, 2015. Again, as a German one gets a very lopsided view of the Rubiaceae family because it is mostly represented in Europe with scraggly herbs bearing pseudo-verticllate leaves. Most species of the family, which by the way is one of the ten largest flowering plant families, are actually woody and have opposite leaves.

This is from our little day trip to Mount Franklin Road in Namadgi National Park in late summer, the same where we saw the Royal Bluebell.
Posted by Alex SL at 10:24 PM