White snow and a white fungus

Today I and three colleagues scouted the vegetation of the Australian National University's coastal Kioloa Campus in preparation for a field trip. Because I will probably write about the area when we go back there with the students, and because the weather was pretty dreary anyway, I will refrain from posting lots of pictures now.

However, on the way between Canberra and Bungendore we ran into snow, a rare phenomenon at this elevation in Australia. 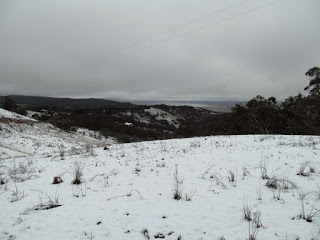 Yes, similar photos have probably appeared on the social media accounts of thousands of Australians today, but no matter.

Although as implied above the light conditions were far from ideal, I tried to take a few pictures at Kioloa, and at least the following one turned out reasonably nice, perhaps because its object is very bright itself: 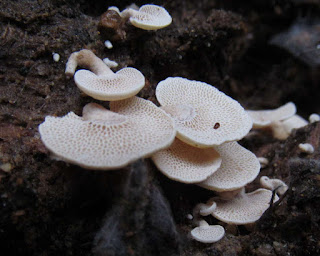 Note the finely reticulate structure of the fruiting bodies. Sadly I don't know the name of this fungus. Even Celeste, the mycologist of our party, said she would have to look it up.
Posted by Alex SL at 10:27 PM