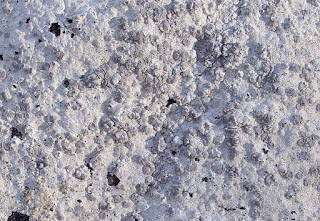 This, I was told, is Lecanora subfarinacea, another lichen that I photographed in central Tasmania in 2013. While fruticose and foliose lichens can look even more alien compared to true plants, I somehow still like crustose species best. And although I generally lean more towards the convergence rather than the contingency view of evolutionary biology, they certainly show a completely different solution to the problem of being a photosynthetic organism on land. (In this case a partnership of two organisms, of course.)

It is easy to imagine that land plants with different pigmentation could have evolved on other planets, especially if their sun isn't exactly the same colour as ours (orange stars are supposedly even better for life than yellow ones). Not least because we already have brown, yellow-brown and red algae on this planet. The much bigger question is if there could be planets where something like Eukaryotes evolves but, because contingency etc. etc., there are never going to be any vascular plant or even bryophyte equivalents.

I find that hard to conceive - the advantage of getting taller to shade and overgrow competitors seems to big, and all it needs is enough time for one lineage to make the first step into that direction - but who knows? Maybe there are other planets out there in deep space that have all the land covered only with crusts like the above.
Posted by Alex SL at 9:31 PM