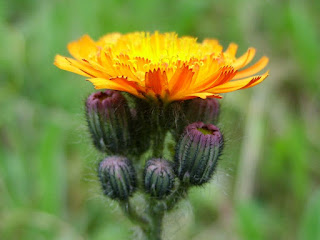 Hieracium aurantiacum (Asteraceae) from Germany, 2012. The orange hawkweed is my favorite species in its large but mostly yellow-flowered genus although unfortunately it is also a badly invasive weed. If you visit the Alpine areas of Australia, you will frequently encounter signs advising tourists to report any sighting of this plant as its aggressive spread could endanger the local flora.

Where they are at home and harmless, the species is however very attractive with its combination of orange flowers and dark capitular bracts. It spreads vegetatively with stolons and makes a good ground cover in sunny, not too wet gardens in temperate areas. In fact, one of the reasons I like it so much is that we had in our garden when I was a teenager. 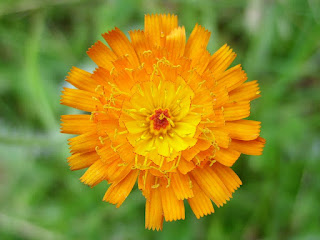 If you are botanically interested yourself, it is probably no news to you that what most novices would call the flowers of the daisy family, are actually heads consisting of many tiny flowers or "florets". In these photographs, and especially in the second one, it is clearly visible that each of the tongue-shaped pseudo-petals has five teeth, which are really the five lobes of a strongly zygomorphic corolla. One can also see in most of them that they are associated with their own bifid style, although the anther tube around the latter is not so obvious.

The daisy family is very large, and it is divided into numerous subfamilies and tribes based on sometimes rather technical characters. The one the hawkweeds, lettuce and dandelion belong to, tribe Cichorieae, is, however, easily recognized by possessing milky sap and only five-toothed highly zygomorphic florets. Other tribes generally have a combination of zygomorphic ray florets and actinomorphic disc florets (sunflower) or only the latter (thistles). The hawkweeds are one of the taxonomically most complex genera of plants because of their many apomictic microspecies, with opinions on the species number ranging from a few hundred to many thousand. Personally, I find the species concept underlying the latter number ludicrous, but that is a topic for another time.
Posted by Alex SL at 11:46 AM