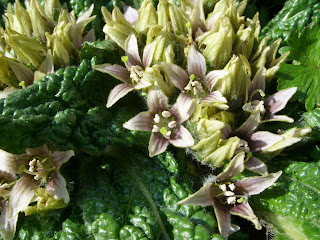 Mandragora officinarum (Solanaceae), Botanic Garden of Zürich, 2009. The mandrake is of course well known from legend and, lately, Harry Potter. The root was believed to possess magical properties but the plant would utter a deadly scream when harvested. Supposedly some people would bind dogs to the plant and then walk off, hoping that only the dog would die when the plant screamed and one could afterwards pick up the root.
Posted by Alex SL at 7:55 AM