One thing I really dislike here are, however, these stupid posters that are perennially lining the streets: 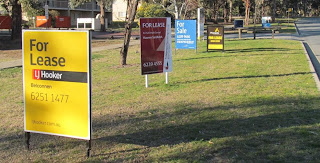 They are set up by real estate agents to advertise flats or houses for sale or rent. Here are seven of them in one place because there is a complex with many individual flats nearby, and a few of them are always vacant. What is more, the agents have a tendency to let them stay in place even weeks after the deal has been done, often with a "sold" sticker prominently added to them, to maximize the time their company name can adorn the sidewalk.

Believe it or not, in Germany we have these things called "classified ads" and "the internet" (shocking, I know), which mean that nobody has to set up posters to advertise the same information in a much less efficient but much more obnoxious way. And somehow people coming to see the vacant flat appear to be able to find it by writing down the address instead of expecting a poster in front of the property in question. Posters like those above do not appear to exist in Germany.

All of that means that outside of election times German streets are generally not plastered with garish posters, while Australian streets are, constantly.
Posted by Alex SL at 10:02 AM