Hooray! The 100th botany picture post on this blog. To celebrate, there are actually two species although I don't know the name of either.

In two weeks I want to start field work, and a bryologist colleague has asked me to keep my eyes open for Riccia. So that I recognize the genus, she has shown me two species in the lawn in front of my workplace. Having graduated from a department of systematic botany whose research focused on liverworts and ferns, I knew a few basic facts about Riccia, but before I came to Australia I never actually saw it alive. 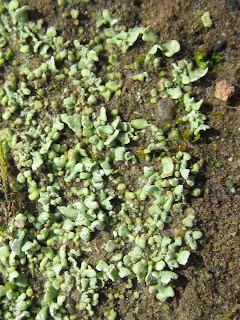 The research in my former institute focused on the leafy liverworts. Simple thallose liverworts are, as the name indicates, really quite simple in their structure, with the thallus consisting mostly of an undifferentiated bunch of photosynthetizing cells. Riccia, however, is a complex thallose liverwort, a small group that builds thicker, more drought resistant thalli with several highly specialized types of cells, although admittedly in that group Riccia itself has one of the least complex morphologies. 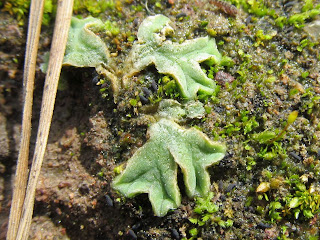 Although I had never seen Riccia in Europe or during my field work in Latin America, the genus is actually quite easy to recognize. The thalli have a very typical dichotomous branching pattern, clearly visible in the picture of the larger species above, and they do not build stalks to raise their sexual organs above the ground. Instead, the sporangia remain embedded in the thallus of the mother plant, and the spores only get released when the mother dies and rots away. One would think that this is not conductive to wide dispersal, but I assume that they are happy being dispersed with mud sticking to animal feet or with dust being blown around by the wind when the ground is dry.
Posted by Alex SL at 10:26 AM