The following is about phylogenetic systematics and its detractors again. Please disregard if the topic does not interest you.

Some concepts and terms are often misunderstood, confused or conflated, and it seems useful to illustrate them in a concise way for later reference. 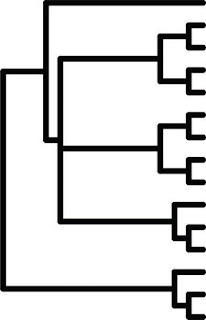 Examples for systems that show a phylogenetic structure are groups of: 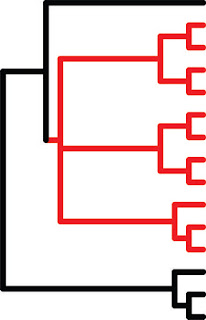 The red area in the above phylogeny shows a monophyletic group. It covers an entire branch of a phylogeny. 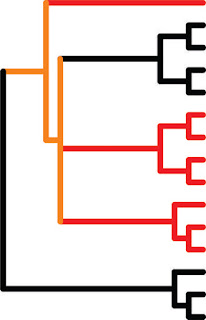 The red and orange area here is a non-monophyletic group. It covers only part of a branch of a phylogeny.

With the same content of extant species, it can be either paraphyletic or polyphyletic depending on whether the orange part is included or not, which in turn depends only on the ancestral character state of the character used to define the group. That shows quite nicely that there is hardly any difference between paraphyletic and polyphyletic groups, a fact one should perhaps take into consideration when discussing the proposal that paraphyletic groups be given formal recognition, or even just when discussing the attempt by evolutionary systematists to redefine monophyletic to mean either monophyletic or paraphyletic. (This is often justified with the observation that paraphyletic groups also have a common ancestor, but well, the same is true of any two species on this planet, even Homo sapiens and Escherichia coli.) 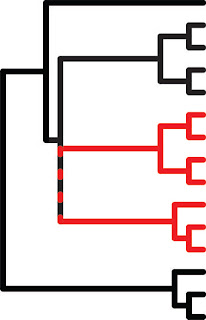 Memo to evolutionary systematists: Please reconsider justifying the acceptance of paraphyletic taxa with polytomies, uncertainties or low bootstrap support; in those cases, the groups you want to circumscribe may even be monophyletic! 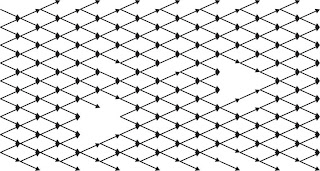 This illustration shows a network. It has a structure that is reticulating, also called a tokogenetic structure.

Examples for systems that show a tokogenetic structure are groups of: 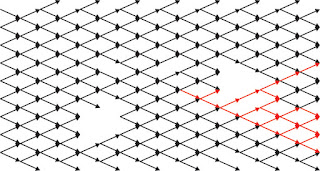 The red area in the above network is not a paraphyletic group because there is no phylogenetic structure for it to be paraphyletic in. It may look paraphyletic if we force the data from this tokogenetic system into a tree-like representation, but in reality it isn't, and science is about describing and modelling reality.

Memo to cladists who think that the sentence "this species is monophyletic" makes any sense whatsoever: This is why it doesn't. Unless you are talking about asexually reproducing species, of course, because groups of individuals from those do have phylogenetic structure.

So is there a name for a group like the one in the last illustration? I am not sure if somebody has already bothered to invent these terms, but paratoketic sounds about right as a counterpart to the terms ending in -phyletic. A group containing all descendants of the common ancestor would then obviously be monotoketic.