An analogy that might help to clarify some issues with cladism

An extended discussion I am currently having with a colleague and tangentially related observations on a discussion over at Larry Moran's Sandwalk blog have made it clearer to me why some people reject phylogenetic systematics, or cladism. Because there are events of lateral gene transfer, introgression, endosymbiosis, chloroplast capture and suchlike, all processes that transfer genetic information between different species or lineages, they see life as having a fundamentally net-like or tokogenetic instead of a tree-like or phylogenetic structure. They consequently reject phylogenetic systematics because you cannot have clades in a non-phylogenetic structure.

That conclusion follows from the premises, but unfortunately one of the premises of the argument is seriously flawed, and it is the premise that life does not show a phylogenetic structure. There are different levels at which evolutionary processes take place, and to really understand what is going on we need to ask ourselves two questions: What are the items that need to form a phylogenetic structure? And what do I see if I zoom in or out while looking at evolutionary history?

As for the fist of these, let us be clear that there are, at a minimum, the following items to be considered: Individual gene copies evolving within organisms and forming gene families which may be mostly tree-like but also potentially net-like through recombination; mitochondria and chloroplasts, both of which are endosymbiontic bacteria inside of Eukaryote cells, and which fairly clearly evolve in a tree-like relationship; individual organisms which stand in a net-like relationships with conspecific organisms if they are sexually reproducing and in a tree-like relationship if they are asexually reproducing; and finally lineages or biological species of organisms.

The claim here is now that evolutionary relationships of species are net-like because the relationships of individual organisms are often net-like. That, however, would mean succumbing to the fallacy of composition, assuming that what is true of the parts must also be true of the whole. A more familiar example would be to claim that an airplane cannot possibly fly because any single part it is constructed from cannot fly, and that claim is obviously wrong. Similarly, biological species can be in a tree-like relationship with each other although there are net-like relationships of individuals within the species.

However, the problems people see with cladism are not all as easily addressed as this. As pointed out in the first paragraph, there are also processes that transfer genes between species. Does that turn everything into a big net, making cladism impossible because we do not have a phylogenetic tree any more?

And this is where I would like to introduce an analogy that might help to visualize a few concepts and clarify why that argument does not really show all that it is supposed to show. That analogy is a river system. Rivers are familiar and they also have generally tree-shaped structure, with the major difference that the directionality is exactly opposite: where life diversifies into more and more branches, a river system starts out as many small branches that ultimately unite into one river and flow into the ocean. Still, the similarities are instructive.

For starters, we can use the river to make the same point about the fallacy of composition. What does a river ultimately consist of? Well, lots of water molecules. And if you zoom in very closely and look at the organization of water molecules, you do not see any tree-like structure at all. Instead the molecules form a well organized network held together by interactions between the positive charges of the hydrogen atoms and the negative charges of the oxygen atoms. 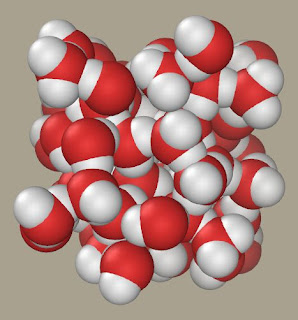 Still, if you zoom out and look at the system from the perspective where you can see a part of the river system, you will easily see its tree-like structure, with side arms uniting into larger rivers one at a time. The river seen as a whole has a reality that goes beyond that of a network of water molecules. Likewise, a group of biological species has a relationship that goes beyond the relationships between several individual organisms from those species.

The relationship between species does become net-like when we have really massive amounts of introgression or, most obviously, hybrid speciation. Okay, how severe an issue is that for cladism? Again let us look at a river system. 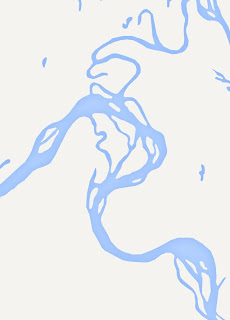 What we see here are river arms that are constantly branching off and then reuniting, which in biological terms might be thought of as rampant hybridogenic speciation, perhaps through allopolyploidy. Sure does not look like a phylogenetic structure any more, and thus we can forget about circumscribing clades.

However, these reticulating river branches are all fairly close together. These are all side branches of the Amazon but you will have a hard time finding any of them reticulating with the Mississippi. Likewise, hybridization cannot happen across huge phylogenetic distances - it is one thing to cross a horse with a donkey but quite another to cross a horse with a mouse. Apart from purely physical problems and any isolating adaptations that the two species may have, the hybrid would have such a chimeric genome that it would not be viable.

So what if we simply do the same thing we did when we moved from the level of water molecules to the river itself? Let's zoom out a bit more and have a look. 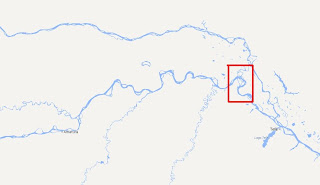 The red box is what is shown in the previous image. Does this still look like a net-like structure? Not really. From this perspective, we are clearly seeing a tree again, with the big northern branch and the big southern branch ultimately uniting to form the river flowing off to the east. Likewise, unless you literally believe that you can cross roses with oaks, ferns with horsetails, woodlice with silverfish, and that all that also constantly happens in nature, you will ultimately see a tree like structure because at some point lineages become too diverged to hybridize. You may just have to zoom out to the taxonomic level of, say, genus or subgenus.

River images were obtained from Google Maps, and the one of the hydrogen atoms from Wikimedia Commons where it was uploaded by user P99am.

What I am writing here applies to Eukaryotes, especially animals and plants. It may really be all completely net-like in bacteria. I am somewhat skeptical of that claim, not least because bacteria do not generally have sexual reproduction, but not qualified to assess it.

Finally, of course introgression between different lineages is a problem in practice because it makes it harder to infer phylogenetic trees. The point of this post is merely to illustrate that, regardless of what some may claim, it is not a theoretical problem for phylogenetic systematics as a classificatory approach.
Posted by Alex SL at 8:26 AM