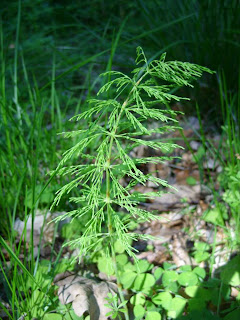 Equisetum sylvaticum (Equisetaceae), Germany, 2012. Another genus that I miss a bit on this continent are the horsetails. I always liked them since I became interested in plants in general, and this may be the prettiest of all species due to its lacy, gracile appearance. It is widespread but not frequent in the northern hemisphere. As a member of the summer green subgenus Equisetum, it is unfortunately hard to propagate because one would have to dig up a good part of the easily fragmenting rhizome with storage tubers to establish it in the garden. Subgenus Hippochaete is much easier, often capable of growing a new plant out of a branch fragment, but (at least in my opinion) not as attractive.
Posted by Alex SL at 9:10 AM