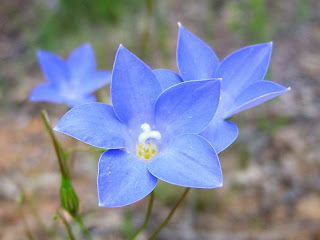 Wahlenbergia graniticola (Campanulaceae), Australian Capital Territory, 2010. Well, I am not entirely sure I got the species right, I find Wahlenbergias rather hard to determine to species. This genus of bellflowers is nearly cosmopolitan but could be seen as the southern hemisphere counterpart to northern hemisphere Campanula. The major difference between the two is apparently the opening of the capsule, but apart from that they are fairly similar. The state flower of the ACT is also a Wahlenbergia but not this particular species.
Posted by Alex SL at 8:27 AM