All day today I was participating in the Bush Blitz Symposium 2013, a one day meeting here in Canberra at Old Parliament House. 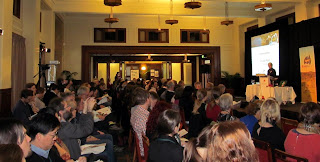 What is Bush Blitz? In the words of the eponymous website:


Bush Blitz is Australia’s largest nature discovery project - a three-year multimillion dollar partnership to document the plants and animals in hundreds of properties across Australia’s National Reserve System. Since the program began in 2010 Bush Blitz has discovered about 600 new and undescribed species and has added thousands of species to what is already known - providing baseline scientific data that will help us protect our biodiversity for generations to come.

Perhaps most importantly, the initiative organizes targeted surveys to document all species of certain focus groups (one of them being vascular plants) in defined areas, often properties that are being transformed into nature reserves. In every case, botanists and zoologists with different specialties are brought together for one or two weeks to inventory the biodiversity of the place, with all the logistics provided by the Bush Blitz team. The scientists collect samples, process them in the base camp, determine them to species and ultimately compose species lists. The Bush Blitz team then writes a report on the survey summarizing the results.

I was lucky enough to participate in two Bush Blitz surveys, one in New South Wales and one in central Tasmania. While I did my part to document the local plant diversity, both field trips also allowed me to obtain samples for my research and to learn more about the Australian flora. One of the most interesting aspects of those surveys is the close interaction with biologists studying other groups of organisms.

In addition to the surveys, the initiative also provides grant money for taxonomic research resulting from the survey work. The symposium today presented results from the activities conducted so far and additional talks on topics relevant to the Bush Blitz project. Topics of the talks were extremely diverse, including teaching and outreach, collaboration with the traditional custodians of the land, hard scientific analyses as well examples of species discovered as new to science, and conservation planning. (I presented a talk on collecting biases - field botanists collect mostly close to where they are and along roads, and they under-sample spiny, very small, ugly and non-native plants. Bush Blitz addresses all these issues by targeting neglected areas and by inventorying all species of a group, not only the conspicuous ones.) The talks were very interesting and the speakers were really enthusiastic about biodiversity. All in all a great meeting.

In summary, the Bush Blitz is a fantastic and globally unique institution; if you want to learn more, you could do worse than reading through their website.
Posted by Alex SL at 11:25 PM

Email ThisBlogThis!Share to TwitterShare to FacebookShare to Pinterest
Labels: conference